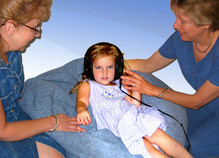 Auditory Integration Training (AIT) is an intervention  that uses specially modulated and filtered music to retrain an individual's ability to process sound input.  Dr. Guy Berard, a French ear, nose and throat (ENT) doctor, developed the Berard method of AIT in the 1960's (Berard, 1993). He and other qualified instructors have trained practitioners to provide the intervention internationally and there are now over three hundred Berard AIT practitioners worldwide.  The benefits of AIT are well documented with over 22 papers published (Edelson and Rimland, 2001).

The intervention was first provided in the US in 1991. A French-made device known as the Audiokinetron was developed by Dr. Berard and is in wide use around the world.  A second device, the BGC, was made in the US to emulate the French device.  A study by Rimland and Edelson (1994) showed the benefit of both devices to be roughly equivalent.  In 1993 the US Food and Drug Administration (FDA) took the position that both devices were "medical devices" and subject to FDA regulation based on claims by manufacturers and practitioners use of AIT would "improve a human condition".  These devices became unavailable in the US as importation, manufacture and interstate transportation were prohibited and their use was limited. The FDA has recently stated that if used solely for Educational purposes, new AIT devices would not fall within their jurisdiction and therefore could be used in the US. (Munzner,1999).

Most years, we follow the local school districts for our weather closures.  Since schools aren't open, please follow our Facebook page or this page to keep you up to date.  Assume you DO have an OT session as scheduled unless we post otherwise or call you directly to switch to telehealth or cancel your appointment.

Our clinics are OPEN!

Please click here to view our video of how things have changed at our clinic.

Please call to to schedule an appointment.  We also offer Telehealth services if that is your preference.

APT partners with Swindell's Resource Center to provide Sensory Seminars PDX once a month at Providence. For more info go to:   www.providenceoregon.org/swindellsevents  to view next event.  Please be sure to register online!

Click here to view as well as suggest topics to cover.